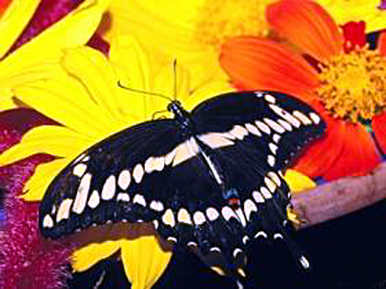 Connor continued his explanation of how the repairs to the roof should be completed. And again the voice, this time a bit louder, intruded slightly into his consciousness as he spoke to the worker. "Daddy, Daddy, Daddy."

The man was arguing. Why is he arguing with me? Connor wondered. Am I not the one hiring him?

Conner explained once again, slowly, exactly how he wanted the problem with the roof to be corrected. What's wrong with this guy? he thought, beginning to feel impatient.

Conner stood still in the heat, perspiration on his forehead, irritated that the roofer felt he had to argue, in an effort to show off his knowledge. Knowledge, Ha! His ignorance! Connor thought. He felt something hitting his leg and wondered absently how the goats had escaped their pens, because it now felt as if one were pushing at him from behind with its head.

As he spoke with more authority this time, telling the roofer in short, precise terms to listen to him and do exactly what he wanted, the little voice became a very loud voice. "DAAAAD-DYYY ! DAAAD-DYYY." Then the word was said so quickly and so many times, "DADDY, DADDY, DADDY, DADDY, DADDY, DADDY, DADDY, DADDY," that he finally realized it was no goat pushing at him, but John. Four year old John who followed him everywhere now, and so quietly sometimes that Conner would be amazed to turn and find the boy standing behind him, watching everything he did.

Now, the beautiful child with his curly black hair was pushing with all his might at his father's thighs. Conner reached a hand behind him and placed it on John's head. John quit pushing, waited, and when no further response came, he began patting Conner's thigh again. Constantly. Never letting up. And the patting continued. Then came the word in rhythm with the pats. "Dad-DY, Dad-DY, Dad-DY, Dad-DY."

The roofer shook his head. Conner retorted somewhat angrily, then suddenly felt a fist go into his stomach. "Ooumph!"

Shocked he looked down. John was looking up at him silently, his small hand no longer a fist, but flat open, palm lying on his dad's stomach.

Conner felt his irritation and anger dissolve; and his tight expression relaxed into a question as he looked into the innocent face with the earnest black eyes, imploring his dad's attention. He could never feel anger toward John. Frustration occasionally, puzzlement rarely, impatience only once or twice, but never anger.

Totally ignoring the roofer, who turned in a huff and walked away, Conner moved his hand to John's shoulder and looked straight down into the boy's upturned face."What is it, son?"

Relieved that his dad had finally answered him, John sighed mightily, put a finger to his lips and said, "Sshh. Look." He opened his hand and a butterfly lay in the sweaty little palm. Butterflies were rare at their desert home and came only once a year, and then for only a few days. How had John found this one, Conner wondered.

Amazed, Conner shook his head, knelt and gently placed John's open hand in his palm. With heads bent forward, nearly touching, they watched the butterfly silently. It did not move. John's forehead crinkled in concern and with wide eyes, he asked his dad in a whisper, "Did it die?" Connor looked carefully. God I hope not, he thought. "Um....hmmmm...."

John waited, watching his dad's face intently. Then, Connor saw the tiniest flicker of movement, and felt more relieved than he would ever have imagined possible. It was alive.

Softly he said, "Be very still, John." They waited, unmoving. At last, Conner blew ever so lightly. The butterfly's wings moved once, twice, and then suddenly up it flew. Conner and John watched it fly, weaving its wobbly way across the front yard to their garden, till at last it disappeared among the flowers.

John turned to his dad, eyes still wide and sparkling now, and whispered, "You did it, Daddy." John, supremely confident that it was his dad's breath that had brought the butterfly back to life, gave his dad such a smile that Conner felt his throat tighten with love.

He said softly, "No, John, I just helped a little." He stood and offered his hand to his son.

John slid his hand inside the familiar palm and they walked toward the house. Then he pulled back hard on Conner's hand. Conner stopped and turned. "What is it now, John?"

John looked up at Conner, and said with all the authority he could muster in his little boy's voice, and in it Connor heard himself speaking to the roofer only moments before, "You got to listen to me, Daddy."

Conner regarded his beloved son for a long moment, then nodded gravely. "You're absolutely right, John. I absolutely do."

Then he hoisted the little fellow onto his shoulders, and as they headed inside, John flapped his arms like wings and cried, "See, Daddy, I can fly like a butterfly!"

At that, Connor ducked and turned and swooped and ran, and John flew. And the air was filled with Connor's laughter and John's shrieks of joy.

It was a moment Connor would not forget.