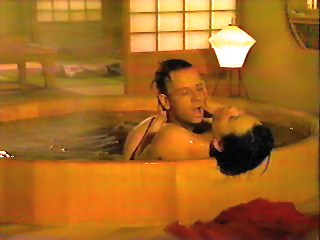 Archivist's note: This comes from the Lyric Wheel.
Delirium
LovesToWrite
Email Me!

The first bolt of lightning took me in the chest, slamming me to my knees. I dropped my sword with a clatter I didnt hear as the second bolt struck, making every nerve ending in my body burst into flames. Coherent thought ceased as the lightning became almost continuous, hit after hit, the energy using me as some kind of flesh and blood conduit. I felt myself falling backward, then nothing.

A jagged breath tore through my chest, reminding me that I was supposed to be alive. The dagger still lodged beneath my ribs begged to differ with that fact, however, and I pulled it quickly from my body before I could really think what I was doing. Blood poured from the gaping woundthe edges were serrated with the points running toward the handle, so pulling it out actually did more damage than the bastard Id been fighting had done when hed slid it into me. As the world swam before my vision, I knew that pulling it out had nicked an artery, and I managed to curse softly before I died for the second time that day.

Breathing wasnt so hard this time, thankfully, but the still-healing wound in my side hurt like someone had stabbed me. I chuckled at the thought, then groaned at the pain it caused. Holding a hand to my side, I managed to stand, pick up my sword and my erstwhile opponents, and stagger off down the alley. I knew the lack of bystanders was a minor miracle; staying put would have been more foolish than accepting a challenge in broad daylight. He had never told me his name, I reflected, as I walked away stiffly, picking up the coat he had discarded at the beginning of the fight. It was big enough to wrap around my slighter frame, and I could hold it closed with one hand and keep the other hidden beneath it with both swords. The dagger I tucked into an inside pocket of the jacket, wanting to save it for later inspection and possible use, if it suited my hand.

I managed to walk completely upright as I left the alley, becoming just another New Yorker protecting myself from the cold wind blowing in off the harbor.

The heat from the bathwater surrounded me as I sank into it slowly, giving my skin a little time to adjust to the sensation. When the water slid over my shoulders, a groan escaped my lips. The fight had been brutal-the physically larger man had pretty much used his heavier sword like a club. Hed whacked away at me till I thought my arms might fall off. Most of the blows had been overhead, but hed thrown in a side sweep now and then, trying to keep me off balance. It would have worked sooner or later if I hadnt noticed that he was counting each stroke as it fell-five, then a side stroke, then seven, then a side stroke, then back to five, and so on. Id finally ducked under one of the side strokes, impaled him, and then ducked back to take his head. That was where the whole dagger-in-my-side thing had come in-dropped my guard. I knew what my teacher would have said about doing something so stupid, so in her absence I said it all for her.

In the middle of my diatribe, the phone rang. I let the machine pick up it.

Erin, if youre there, please pick up the phone, a rough voice said , accent indeterminable. I sawan interesting show a little while ago, and-

I hit the button on the speaker phone beside the bathtub. Im here, Connor. I was on the receiving end, not the giving it up end.

In the bath already? the older immortal asked, amusement not quite hiding the relief in his voice. That could be record time, even for you.

Probably. The bastard challenged me four blocks from my flat. Im fairly certain hed been following me all day; I kept feeling a hint of someone close, then it would fade away. Never got his name, though, I finished, knowing that would be his next question.

Some people have no respect for their opponents. I thought it was only polite to know the name of the person youre trying to kill.

Yes, I realize that. There was silence on the other end for a moment. Wishing I was there to rub your back out?

Definitely, I replied, shrugging my shoulders in the water. But by the time you got here from all the way across town, the water would be cold, I would be frozen, and-

I am outside, he interrupted, chuckling through my shocked silence. Buzz me up.

I kept my eyes closed as I felt Connor climb into the tub and settle behind me. Calloused hands smoothed out the muscles in my forehead and ran through my short dark hair. His fingers lingered on my neck, digging in with the ends of his fingers and his knuckles. Then his thumbs went directly to the tendons where the shoulders reach the neck, and I whimpered as his strong hands worked the knots there with unrelenting pressure. He worked his way down my back, leaving no muscle untouched.

The nerve endings that had been so sensitive barely forty-five minutes earlier during the quickening roused again as Connors skin touched mine. As his hands rubbed and dug into my back, his lips brushed my neck, barely touching me. I shivered as he reached the tendon he had first dug into and the light kiss became a caress. Then he feasted on my neck, using tongue and teeth like he was trying to draw the flames I was feeling from my skin and into his mouth.

Youre glowing, he murmured against my skin. I dont know if its the heat from the water or the energy from the quickening, but when I saw you here, possessing all the beauty of the brightest of stars-

I laughed out loud, turning in the water to face him. "Flatterer, I accused him between giggles. Youre already in the bath with me; you know Im not going to shoo you away anytime soon. Whats the point of softening me up anymore for this round? Afraid I wont invite you back?

As I spoke, I rose up in the water and slowly took him inside me, watching his face as he was torn between the need to reply and the desperate need to move I knew he was absorbing from me.

Connor caught my face between his hands. Even after this round, and many more after that, I will be hungry still for more.

The open warmth in his normally chilly eyes held my gaze. Always, hungry still for more, he repeated softly, leaning in to claim my lips and my sanity.