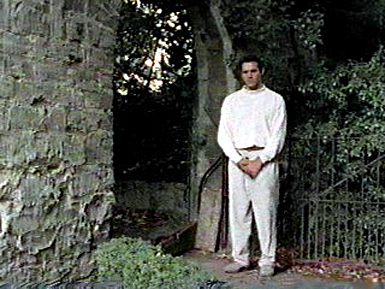 Garden of the Silent Listener
CER
Email Me!

Archivist's notes: This comes from a Mid-Week Challenge on the Holy Ground forum. The challange had these parameters: "Write a story that featured a garden of any type and any two immortals in it." That being said, here's the story--enjoy!

In tracking down the second half of an armoire set for a lucrative commission, he had contacted a good friend in Harrisburg.

You look awful, Mac, had been the comment of his friend and colleague when Duncan had walked into the warehouse. Are you all right?

Im fine, hed lied. How could he tell a mortal about the recent loss of a brother of nearly 400 years? How could he explain that in ten years he had lost everything he loved the most, a lover, then a son, and now a mentor?

I know pain when I see it.

Duncan tried to avert the intense scrutiny with a casual laugh. Ill get over it.

Uh, hum, was the skeptical reply.

They had gone on with the friendly business of bartering and purchase before his concerned friend had finally brought up the topic again.

I have an address for you, Mac, he said as he pulled out a pen and paper. I found this place after Janet and our daughter were killed in that car crash a couple of years ago. The place is like magic, Gods gift to the weary of heart.

So here he was in the middle of the West Virginia mountains, not really certain why he had come. Parking his rental car next to the sign that announced: Welcome to the Garden of the Silent Listener, he got out and slowly walked through the arched trellis holding an abundance of Morning Glories.

As he looked around at the well trimmed hedges and flowers in their cultivated beds, he inhaled a great breath of clear mountain air flavored with their scent.

A gentle tug on his sleeve drew him back. A wizened little women stood next to him smiling beatifically. She wore gardening gloves, and carried small pair of pruning shears and a hand hoeing claw.

You are welcome to the garden. She studied his face. You have come a very great distance.

Yes, I drove here from Harrisburg.

I think much farther than that, she dismissed his evasion. Pointing to an almost hidden path that wound away from the formal garden into a cared for wildness, she said, The Listener is awaiting you.

She nodded sagely. The Listener hears confessions of the soul from those in need of healing. Patting his arm sympathetically she pointed again and then walked away.

He stood undecided for several heartbeats before he gathered himself and walked onto the inviting path. A minute tremor in the core of his quickening informed him that he had stepped onto Holy Ground, one of the ancient places in the world that was holy to all who came here. Who had worshipped here long ago? He wondered. What ancient tribe had renewed their spiritual being here? There was no answer, just peace.

It was a remarkable peace, too. The only sound was the rustle of willow leaves and the buzz of busy insects punctuated with cheerful birdsong, but underneath all that there seemed to be the silent breathing of the unseen listener. He was intrigued.

Duncan wandered along the well kept path through a controlled wilderness until he found the gurgle of rushing water drawing him into a green grotto of Weeping Willows growing along a small clear stream that tripped over smooth river rocks. Soft grass that waved invitingly from willow trunk to stream edge lured him to sit down. Leaning back, he could see the clear sky with its puffs of creamy clouds sailing lazily before the breeze. The nearly perceived presence of the Listener weighed gently on his being. His soul sighed in pure pleasure.

The gossamer touch of loving acceptance enveloped him, a touch that reminded him of his lovely Tessa. A deep breath of pain escaped his lips as her loss gripped his heart. I will miss you every day of my life, my love, he murmured to the Listener.

A whisper of wind touched his brow, ruffling his hair. He closed his eyes against the sweet pain of it.

Oh, why wasnt I there for you when you really needed it? His eyes squeezed shut. Richie didnt have 400 years of experience. I could have protected you. A tear leaked out and ran down the beard shadowed cheek.

Again the breeze felt like a caressing hand, Tessas hand. He was reminded of her smile, her beauty of soul, her warmth of loving and some of the pain released. He pictured her in his mind and his body remembered hers: her soft cheek, her silky hair, the velvet of her neck against his lips, the weight of her breasts in his hands, the curve of her body along side of his.

Once again the caressing hand touched his cheek and an overwhelming love released the fist of pain around his heart. Tessa was there, locked inside him forever and her love surrounded him. He opened his eyes to see the blue sky that matched the blue sparkle of her eyes and all the good times flooded through him. A smile touched his lips as this particular pain evaporated in the sunshine of her love.

Even in his new found euphoria he could tell the Silent Listener was still there. He could almost hear the breathing, almost feel the presence. Was there another confession of pain that needed voicing?

Oh, yes! The pain of Richies death hit him like a blow, a stab wound to the heart. The horror of knowing that his own actions had caused the death of one so young, so cherished. I thought that was behind me, he cried to the Listener. I know I was used as a weapon. Ive come to terms with it.

Have you? asked the rustling leaves.

Pain squeezed Duncans heart once again. He bowed his head. No, he admitted. I should have done something! I could have warned him.

I should have thrown down my sword. I should have realized it was Richie. He pounded a fist into the unforgiving earth.

I tried to warn him. I tried to teach him caution. Why didnt he listen? He was so damn hard headed but he had such a giving heart.

The caress on his brow was back and a new thought pried itself into his mind. What if . The idea seemed so simple he couldn't believe he hadn't thought of it before. Yes! He must have seen a different reality too.

Yes, the hushed breath of the Listener slipped through the grass.

A rush of forgiveness blew through his soul uncovering a strong love of son and student that touched the hurt place in his heart. Suddenly the memory of telling Methos, people live as long as someone remembers them, lit the gloom.

I will remember, he promised the Listener.

Contentment settled around him for the first time in a very long time. But the Listener was still there waiting for another confession of pain. The waiting pressed around him.

Connor, the rolling burble and splash of the young stream prompted.

Ah, yes. Another pain to beat down his soul. How could Connor, the person who had taught him to live, want so much to quit? How could the immortal who had fought and won against so many older, more powerful immortals be the one to sink in the quicksand of dispare at all the pain and death?

Well, he thought, hadnt he felt the sucking mire of gloom drag at him more than once? What had kept him from slipping in? Connor. Amanda. Darius. Even Methos.

Why didnt Connor say something that day on the streets of New York? Why didnt I push for an answer?

You did try, came the answer.

A picture of Connor sinking away formed in Duncans mind. There he was with hand outstretched, reaching with aching fingers to touch Connor, to grab his hand or clothing , anything to rescue him. But Connor resolutely refused to take that hand and looking up into Duncans eyes he said, Good bye, my one true brother.

Tears streamed down Duncans cheeks as he repeated the last thing he had told Connor, I love you, Connor.

You did all you could, whispered the listening presence.

Suddenly, a flood of caring washed through Duncan. Images of four hundred years of jokes, teasing, fun, and plain tom-foolery between the two of them as well as sparing matches, both sword and wit, sprang into his mind, leaving him with the silver and gold bond that was Connor.

I will miss him always, he confided to the Listener but this time the pain was gone.

The photo perfect memory that was the blessing and curse of most immortals supplied him with fond recollections that soothed him into sleep.

The rusty voice of the old woman gardener woke him. Are you all right?

Yes, he answered automatically but was somewhat surprised to find it was true. The dragging heaviness of heart had gone. He felt only love around him. Yes! He smiled brightly and kissed her on her forehead.

She giggled like a young girl. Yes, I can see that now. The Listener always helps.

Looking around at the closing day as they strolled back to the entrance, he asked, Could I come again sometime?

She patted his hand. But of course. She waved her arm to encompass the entire garden, We are always here.

He kissed her hand. Thank you.