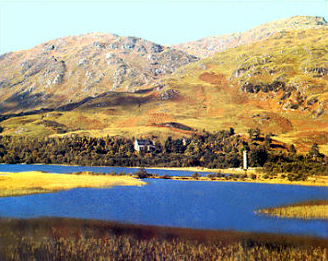 This is Glenfinnan, Scotland in the summertime with Loch Shiel in the foreground. The memorial of where Bonnie Prince Charlie landed can be seen as the tall tower in the picture.
The Legend of Glenfinnan
Virginia Foster
Virginia Foster

Disclaimer: Duncan and Connor belong to Rysher and Panzer/Davis. I just borrowed them for a little while and will return them unharmed.

"Please... the children pleaded, another story! Just one more, please?"

"All right, just one more. It is a special occasion, after all." The storyteller smiled at the eager children.

"Many years ago, there was a great battle between the MacLeods and the Frasers. For many MacLeods this was the first battle and they boasted of their bravery.

Many lived to tell their tales of bravery, and those of their kin. But also, as in all wars, many men fell that day, in defense of their clan, never to rise again.

There was one who was run, through, right in front of his cousin. He was brought back to the village dead, and washed for burial. Then the most mysterious and frightening thing happened...he who was dead sat up and began speaking as one possessed. By the next day the demon, for it could be nothing else, was walking through the village and calling himself by the dead man's name - Connor.

There were many arguements as to what to do, whether to burn the demon, or stone him. Finally, it was Connor's cousin, Angus, that said "Banish the demon from Glenfinnan. That will be enough." Having seen his cousin killed once was as much grief as Angus could bear.

So banish the demon they did."

"What happened then, Storyteller?" the children wanted to know.

"Well, that was many, many years ago, but it is said that on misty nights you can still see the ghost of Connor MacLeod wandering the Highlands, looking for who knows what."

"Well, if we ever see his ghost, WE won't be afraid." said one of the other boys. The other boys nodded in agreement, brandishing their wooden practice swords. With this, the children ran off to their homes, playing at battling the demon MacLeod as they ran.

The storeteller stood, chuckling to himself as he watched them. He knew that the story of another great battle between two other men would have to wait for another time. It had been a long day, and many stories had been told. Now it was time to find a warm fire, and a warm drink. As he walked, he watched the boys in their imaginary battles. The eldest among them was the Chieftain's son, Duncan. The boy was brave, and one day would make a fine, fearless Chieftain for the Clan MacLeod. Yes, indeed, a fine Chieftain.