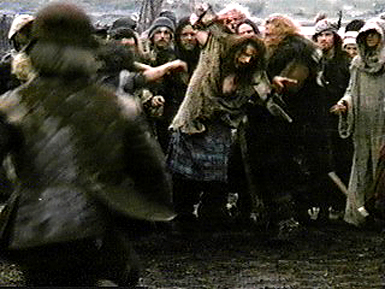 Pilloried. Mocked. Humiliated. Connor MacLeod tilted his face toward the gray skies, taking comfort in a few stinging drops of rain. Maybe the thunderstorm would distract the angry peasants of Glenfinnan and send them scurrying back to their huts. He tried to shift the wooden beam lashed to his shoulders and back, but felt no relief from the crushing weight. He should never have gotten up that morning, never dared open his mouth, never assumed his clan would be reasonable or just.

"Devil!" An old woman threw a fistful of dung at his chest.

"Heretic!" A younger woman's spit flew through the air.

One of the rocks hit Connor behind the right knee. The sharp pain caused him to fall heavily in the mud. The world went fuzzy at the edges and started to gray away, but a familiar voice from nearby anchored him and brought him back.

"It's your own fault, you know," Duncan said.

Connor heaved back so that he could sit on his haunches. He squinted up at his cousin. "What?"

Duncan unwrapped a cherry lollipop. He sat on a high, dry stack of hay, looking quite spiffy in wine-colored breeches and a white linen shirt. "I said, it's your own fault."

"Who asked you? You don't even belong here." Connor felt a muscle twitch in his jaw.

"Dramatic dispensation." Duncan gestured on high. "You know - change the past, fiddle with timelines, ignore canon - anything's possible if you know the right people."

Connor glared at his younger kinsman. "Which obviously you do."

Duncan swirled his tongue around the lollipop. "I told you before, you have to play the game right."

Connor's simmering anger began to boil up again. "All I said was that maybe we shouldn't buy Laird William's new cow."

"But the last one he sold us was lame!"

"And the one before that had mad cow disease!"

"So why should we buy another one from him?"

Duncan smiled sunnily. "Because we're MacLeods. MacLeods always buy Laird William's cows. We buy his chickens, seed, hay, saddles, horseshoes and boots, too. Only the most disloyal and faithless scum of a MacLeod would dare suggest we could do something better with our money."

Connor struggled to his feet. If he swung around just right, he might be able to knock Duncan off that high perch of his. "That makes no sense!"

"You obviously haven't been hanging around Glenfinnan much," Duncan said. "Besides, there's always Laird William's horses."

"Horses? What about the damn horses?"

"They were beautiful," Duncan said dreamily. "The best horses in all of Scotland. Nay, in all the world. Gorgeous, sleek, handsome horses."

"Half of them were mangy fleabags!" Connor yelled.

A handful of mud landed on the side of his face as a young woman, her breasts heaving beneath her skimpy gown, shouted, "The devil's in ye, Connor! How dare you insult Laird William's horses!"

"Now, now." Duncan slid off his haystack and comforted the woman with a hug. "He means well, he just doesn't know any better. He's ignorant scum, don't you know that? Now go along and fetch me some grapes, won't you? You're a doll."

"Ignorant scum?" Connor advanced on his cousin, the hated beam slowing him, his wrists burning beneath the ropes. "Untie me this minute, Duncan MacLeod, or I'll make you regret it the rest of your life."

Duncan took a nervous step backward and raised his hands helplessly. "I can't. I work for Laird William. Won't you reconsider taking back what you said? Tell everyone it's a fine idea to buy his next cow."

Connor asked, "And if it's a terrible cow, can we get our money back?"

"Out," Connor growled. "Get out of here and go back where you belong!"

"All right," Duncan said, looking resigned. "Just don't forget I tried to warn you. You should expect personal attacks when you try to use common sense in Glenfinnan."

"Damn you, Duncan! Damn you and the horse you rode in on!"

"Laird William's horse." Duncan mounted a fine black stallion with a cigar sticking out of its mouth. He kicked the horse into a trot. "And don't you forget it!"

"Devil!" someone screamed, and cow pies sailed through the air. "You're not a MacLeod anymore!"

Connor turned away and tilted his face up to the sky.

To the Authors' page.