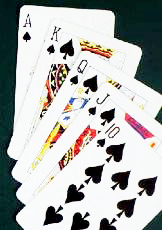 Author's Disclaimer: Just for fun, no money made. Any mistakes are my bad. Comments please.

The small room had that closed, well-used smell about it -- the group of them had been at it for almost two days, leaving only to answer nature's call or to catnap between hands. It was Methos' deal, and he was arranging his cards. He had won the last hand, again, and was feeling smug. They would probably reach the bottom of Richie's wallet soon, and he had absolutely no idea how much money Amanda had, but if Methos' luck -- and his playing skill -- held, he'd get enough out of the Scots to finance a nice vacation. And he knew he had to do it the honest way -- the idea of being caught cheating by Connor MacLeod was not a particularly pleasant one.

He checked out his poker opponents. Five Immortals in one room, and not a sword in sight -- incredible. But these were people he trusted, for the most part. Duncan, dark and passionate even about his cards, was still the boy scout, although he looked rather disheveled. Connor, cynical as usual, had been drinking a great deal, but he had to have a hollow leg, as it hadn't seemed to affect his poker playing. With two days' growth of beard, the elder Highlander looked positively dangerous -- not that he wasn't dangerous in any case. And Methos had to give Amanda credit --she hadn't even *tried* to palm an ace. But as she sat across him, taking turns frowning at her cards in concentration and smiling indulgently at 'the boys,' she presented, even after two days, a cool, beautiful and desirable figure. Still. Always the temptress. As for Richie Ryan; Richie was less innocent than he had been, but in this crowd, he was definitely the ingenue, and a tired one at that. Methos tchtd internally. These kids just didn't have the stamina! Then he thought: let's have a little fun.

"And now, for something completely different," Methos said.

Amused but not derailed, Methos continued, "I was remembering that I towered over him. That's one of the reasons he even took notice of me, looked 'up' to me, so to speak. He would certainly have noticed you, MacLeod," he said to Duncan. "Especially you. He wasn't tall."

This was a good hand to discard, so Methos put his lone high card, the King of Clubs, on the table and tapped it with his forefinger. He ignored his fellow players' groans of protest and continued on his merry way. "You'd think an invading army would be the antithesis of civilization, but I learned more about civilization by traveling with them ..." He paused, reflecting. "It must have been Aristotle's influence on the boy."

"By 'the boy' you mean Alexander?" Connor asked. His voice was raspier than usual from too much drink and not enough sleep.

"Got it in one, Highlander," Methos said, giving him the teacher's approving-of-a-good-student smile.

Connor grunted, half-annoyed, half-amused. He threw his cards down, then leaned back in his chair to stretch his arms over his head.

"What the hell are you talking about?" Richie asked.

"The cards, Richie. Each royal card stands for a real king. Clubs must be Alexander the Great, right?" Connor asked.

"And I bet you knew them all," Duncan said, smiling as only someone that well-lubricated with one-hundred year old Scotch can smile -- although, Methos noted, he wasn't too drunk to bluff.

"So we're in a mood to show off tonight, darling?" Amanda purred, removing her left hand from her cards and reaching over to softly stroke Methos' cheek.

Connor snorted. "When isn't he in a mood to show off?"

"All right, I'll bite." Richie seemed quite happy to put his cards face down on the table, destroying this hand, while Duncan and Amanda dumped their cards with obvious relief. "How about...?" He searched among them until he found it and pointed at the King of Diamonds.

"Julius Caesar, to be precise," Methos corrected them.

"You mean there was more than one Caesar?" Richie asked.

"Caesar was a title," Connor answered. "So please regale us," he continued, this time sarcastic, turning to Methos.

Methos smiled. "A brave man, to walk into his own death knowingly. I think he believed Brutus wouldn't pull it off at the last minute. What fools these mortals be!"

"You are a showoff tonight," Amanda said. "So, you were a ... Senator in ancient Rome? Or a slave?" she asked with an evil smile.

"Neither," Methos answered, not giving her any satisfaction. "But I saw him die."

"Ah! A face in the crowd, no doubt picking pockets in the meantime," Amanda countered, showing a row of bright, even teeth.

"Oh, that's more your style than mine, Amanda." He gazed at her under hooded eyes. She was back with Duncan now, and her touch on his cheek reminded him that he wanted her again. Or still.

"That leaves the King of Hearts," Richie said, interested in spite of himself. "You know, old man, you're a walking, talking, living encyclopedia.'

"Too bad he's so damn annoying," Connor suggested, pouring himself another shot of whiskey.

Methos was undaunted. "Charlemagne. Knew him. Not personally. He was a true believer."

"Believer in what?" Richie asked.

"He was a Christian King and acted accordingly," Methos explained. "According to the times, anyway. And as for the King of Spades, King David ... I was a member of his court. He was not a bad man, but ... let's just say that the writers of the Bible gave him more credit than he deserved."

Methos smiled. "In eleven years of constant warfare, Alexander did not lose a single battle. No other general has that kind of record."

Connor snorted. "And this was because of you?"

The smile left Methos' face. "I had some experience in warfare and tactics," he said, so softly that the others looked at him. He waited for the rude comment, the barb, but it didn't come, and as he boldly met the eyes of the other Immortals in the room he realized why. They were going to give him a break. They were going to let it pass. Perhaps, he thought, this was the definition of friends.

"We keep playing?" he asked.

"I need to win some of my money back," Duncan said.

"My money now," Methos replied. "But I'll tell you what. I'll be generous and spring for takeout."

And to an enthusiastic chorus of agreement, he did just that.