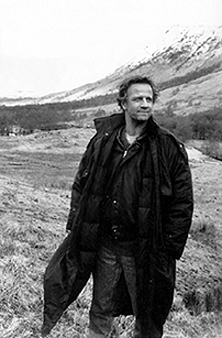 And I Must Bide
lynnann
Email Me!

Author's Notes: The story was originally written for a challenge given on the Holy Ground Forum. Write a short story, poem or scene inspired by a piece of music. There are no other restrictions, just go where the music takes you. Please mention the title of your inspiration and include lyrics if there are any. Any music style, era etc. qualifies.

Minor embellishments and changes were made for Connor's Rotunda, because I could. No money is made from this brief sojourn into Connor's world.

It was months before her birthday, six to be exact, but he had felt a sudden yearning to be in the Highlands that autumn. He had enjoyed his kinsman's company in Paris -- until the evening he had been persuaded by Duncan to accompany him to Dawson's blues bar. The black singer Joe had hired, answering a request from a slightly tipsy tourist, had sung "Danny Boy" with an emotion in her contralto voice that had touched not only a few patrons, but the austere older immortal as well. He had downed the Scotch in his glass in a single swallow, tossed some francs on the table and stalked out without a word when the song ended. When Duncan caught up with him, Connor had only asked for a ride to the Paris Orly airport.

He caught the last available flight to Edinburgh that night, and rented a Land Rover to take him across the country to the Highlands; the wide motorway narrowed as he left towns and then villages behind him in the early dawn. The vehicle dropped and swayed through the eroded ruts of the trail that had once brought carts to the forge. He finally stopped the engine near the base of the hill, setting the handbrake with a sure hand. He looked out through the windscreen at the scenery and remembered the last time he had been here: his son John had been with him.

The eleven-year old had listened intently to the story of immortality his father told him, asking the questions of a boy on the brink of manhood about his own beginnings, needing to know where he fit in his father's life. Connor had never lied about the adoption, about Brenda's tragic death so soon after, but he had always explained little things away as 'magic' and the boy had believed with the trust of a child who loved his father, always knowing he was loved in return. John was old enough -- wise enough -- to understand the need for secrecy, and had hugged his father fiercely when Connor had finished answering all the questions. "I love you, Dad," the boy had said.

"And I love you more," Connor had responded in relief, planting a kiss on the top of John's head. Connor missed the teenager -- now in Europe as an exchange student -- but the words of the song he had heard the night before had forcibly reminded him that he missed many people from his long life of nearly five centuries. But none more than his Blossom, his fair Heather, with tresses that had shone as bright as the sun, and eventually had glistened as white as snow.

He stepped from the Rover and shrugged on his parka, breathing in the crisp October air of the Highlands. The low voice of the singer faded from his head as he strode up the hill to the gravesite. Even though the song was written long after her death, he could clearly hear the soft singsong voice of his first wife.

If ye come, and all the flowers are dying,

And I am dead, as dead I well may be,

You'll come and find the place where I am lying

And kneel and say an Ave there for me.

"No prayer, Heather, except the one in my heart," he said as he stood by the grave known to few. "I miss you . I always will. Ramirez tried to warn me, but I wouldn't exchange a single day of what we had; missing you now -- it's how I know I'm alive. It would be easy enough to let it end, but the old Peacock taught me well," he said wryly. "The pipes are still calling, and you know I can't turn my back on a fight. I may wear the clothes of a modern man, but I still have a warrior's heart, and giving up is not who I am. Be patient, Blossom," he entreated.

The Highlander lifted his eyes to the mountains that surrounded him. Little had changed in this place during the four hundred years since he had left. The forge and the buildings had crumbled to moldy ruins in the damp air of the centuries, but the mountains remained steadfast and firm. As I must, he thought with conviction. He closed his eyes, remembering her -- remembering them together. Peace filled the warrior's heart.

He dropped to one knee and pulled a new candle from his pocket, placing it in the small cairn built a century ago when the spring wind had blustered on the hilltop on one of her birthdays. He struck a match and touched it to the white wick, the fire dancing high before settling into a short flame. "I love you, Heather. Every day brings us closer to the time we'll be together, but for now, I am the one that must bide."

And I shall hear though soft you tread above me

And all my grave will warmer sweeter be

If you will kneel and tell me that you love me

Then I shall sleep in peace until you come to me.

"Sleep well, my bonny Heather. I love you so."

The soft wind sighed in answer.