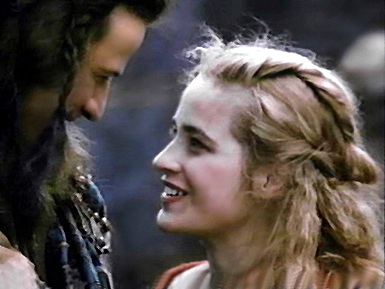 No Change of Heart
lynnann
Email me!

Archivist's note: This story comes from a challenge I made for the Rotunda. The challenge was to have involved 3 characters: Connor, Heather, and Rameriz. It was to have dealt with the issue of an immortal's sterility: how they coped with it, how they dealt with it, how it affected others around them ecetera. It's an issue that hasn't been dealt with in many fanfics. Enjoy and if you like Lynnann's work, email her and let her know!

Disclaimer: Connor, Heather and Ramirez belong to someone else. I have merely borrowed them for a short time to tell a story.

Ramirez tugged the rough woolen blanket higher as he made every effort to obtain the elusive sleep denied him. The chilling draft that had whispered against his sensitive neck was vanquished, but even the thick blankets and furs could not extinguish all the audible evidence of mating. Muffled sounds from the other side of the stone hearth, sounds of passion and desperation, reached him on his solitary bed. Ramirez hazarded a guess that MacLeod was refusing to accept the truth presented him earlier that day in the market place. His immortality would not be realized in children as he, like other men, had dreamed. Immortals could not have children, would not grow old with loved ones. Immortality was a lonely, heart-wrenching affair.

Denial is a fool's game, Highlander. You will learn that eventually, if you keep your wits about you... and your head. We are what we are.

Heather had spoken, nay, prattled a goodly portion of the way home from the village, about this child she had seen, and that baby she had held. She had nattered on about the day when they would have their own children -- boys that resembled their handsome father, and girls with pretty blond hair, exact copies of their mother. Connor's responses had grown shorter with each passing moment, his mood lowering, until even Heather had descended into silence. Riding behind her husband, her arms clasped around his waist, her skirts hiked up almost to her knees, she had glanced briefly at the Egyptian at their side. The confusion in her eyes had caused Ramirez a sharp twinge of regret and his soul ached to know what was to come for them both. He was fond of Heather, he delighted in teasing her, and he knew that she loved the boy. However, marriage was about children, and about growing old together. She would have neither with MacLeod; and the Highlander would have neither with Heather.

The old one rolled onto his back and opened his eyes. The log fire blazed hot enough that the clods of peat would catch easily. Someone just had to be willing to crawl out of bed to feed the fire; and at the moment, Juan Sanchez Villa-Lobos Ramirez, chief metallurgist to King Charles the Fifth of Spain, was quite comfortable where he lay. He gazed at the firelight shadows dancing across the ceiling and walls, weaving patterns that hypnotized and seduced. He drifted off to tantalizing memories of his own passions: three wives and countless lovers. His last wife, a sloe-eyed, raven-haired beauty, dead for two millennia, still occupied the majority of his dreams. However, more recent trysts with Spanish senoritas were brought quickly to mind at moments like these, scents and sensations easier to recall.

The low, sweet laughter of the woman roused Ramirez from the pleasurable recollection of an embrace by a spirited serving wench. In a moment he was transported from a citrus-scented Spanish orchard to the earthy cottage of the Scottish croft.

"Maybe this time there will be a child." Heather was in breathless good humor.

There was what seemed an eternal silence. Ramirez, his own breath stilled in apprehension, heard only the fire -- crackling, shifting -- as he waited for the young Immortal's response. "There will be no children, Heather," Connor finally admitted in a fractured whisper.

Is that panic in your voice, my dear? Tell her, boy. Let her decide for herself.

"Oh, my sweet love," Connor's voice cracked, guilt-ridden. "It isn't you; it's me. He says our kind can not have children."

"But all of our hopes... our dreams of a family? How can he be certain?"

"I don't know, but he's been right about other things. If you want to leave me, to find a good man who can give you the sons and daughters you want...."

Listen to him, Heather.

"I don't want another husband. I only want you. It is your children I wanted. But even if we have no children, we still have each other."

"You may change your mind."

"I won't change my heart." She was adamant.

Ah, Shakiko, you professed the same to me, and I loved you all the more.

"I won't age. In time, I will look like a younger brother, a son, a grandson. Oh God, Heather! This immortality is a curse!"

You have no idea, MacLeod.

"Hush yourself, Connor. You would have died in battle against the Frasers without it. We wouldn't have met, never have had this time together. I would not trade you for children or for grandchildren. I will not."

Did you silence him with your finger, or with your lips, sweet Heather?

"My dearest husband," she chastised gently, "children were to be proof of our love to the world. The only proof I need I see in your eyes when you look at me, and I hear it in your laugh when you tease me. And your touch... you've spoiled me for any other man, Connor. I swear I could feel your touch clear across the market square when you waved at me today. You opened your arms wide and I wanted you so badly." She was silent for the briefest moment. "Do you want me to leave? Can you not stand the thought of me wrinkled and gray?"

"I cannot stand the thought of living without you. I will never leave you, Heather." His voice trembled with determination.

"But in time, I will leave you; what choice will I have when God calls me home? Will you remember me, my beautiful man?"

"I will remember you, Blossom, with my whole heart. Your laugh, your smile, your touch... I will remember our love. You will be with me for as long as I live." The voice of the young Scot broke with the last phrase. The Egyptian heard the muted sobs, and Heather's comforting murmurs to her husband. He rolled towards the wall and pulled the heavy sheepskin at the bottom of his pallet over his head.

It will be hell for you to lose her, but isn't heaven worth it? You've found yourself a good one, Brother, and maybe you should hold on to her. They are few and far between. Remind me to tell you so in the morning.