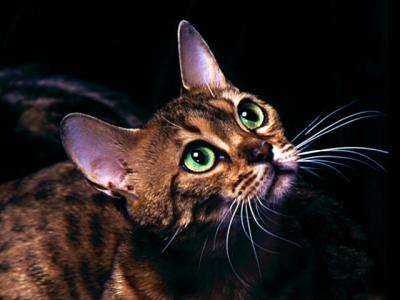 Duncan started as a heavy weight padded across his lap and settled on his stomach. He opened his eyes to see bright green ones regarding his. The purr emanating from the furry chest deepened as he stroked her soft fur. Retrieving the book from his chest, he set it aside on the low table. The cat took this opportunity to scoot closer to his face, tucking her paws in as she settled once more.

Thought youd take advantage of the warmth eh? rumbled Duncans baritone. He scratched her cheek lovingly and the cat leaned into his fingers, savouring the comforting sound that she both felt and heard. It was chilly in the barge but he didnt notice it. Growing up in the Highlands of Scotland had something to do with that.

He lay contentedly for awhile listening to the rain beating down on the deck and the cat purring on his chest. A fond memory of another such day waking to similar sounds floated up into his consciousness.

Only it wasnt a cat and her contented purring that had awoken him then, it was the sound of the rain falling again on the trees overhead and the soft snoring of his kinsman.

Duncan pulled his plaid tighter about his shoulders, trying not to disturb the sleeping man nestled against him. He smiled down at Connor seeing the youthful face unlined and worry free. It wasnt often he was treated to this sight. Most of the time the dictates of the Game and life on the road painted the harsh realities for all to see.

Another of their kind had stalked them for days. The rain had made it hard going. Sometimes it had come down in sheets and they could barely see. Soaked to the bone, both were frustrated with the mystery Immortal. There had been no challenge, just a barely felt presence now and then. So they had slogged on toward the next town knowing it would come sooner or later.

As always, Connor was concerned that the mystery man was after his students head as well as his own. Go on about your business, but never let your guard down, Connor had said. Weve done all we can to flush him out. Neither of us are good at waiting, so lets go and not let him bother us.

But bother them he had. Connor had decided he would sit watch at night, and no amount of arguing could change it, but after three days Duncan had had enough. His cousins normally taciturn personality had degenerated into out and out hostility.

He lashed out at Duncan for every little thing: he was walking too fast, he wasnt walking fast enough, he was making too much noise When they had finally stopped for the night, Duncan confronted Connor.

He started gently, I know this coward is driving you crazy, Connor, but you cant go on like this.

Duncan cut him off before he got going, No Conchobhar, he said soothingly, I will stand watch tonight and you get some sleep. This little over hang is the best place for us to be for the next few nights. A nice solid rock wall behind our backs and a place to dry out will do us wonders. We need to hunt again anyway, here is as good as any, said the student for once taking on the role of the teacher.

I hate it when he comes at night, Duncan. I know he wants to draw me away so he can come for you. I will not let him take you!

Wearing yourself out is exactly what he wants. Were not playing his game and maybe thats starting to grate on his nerves. That and this damned rain, thought Duncan. At least it would be dry enough to have a fire tonight. He pulled some kindling out of his pack and soon had a small fire crackling and popping.

After a hot dinner, Duncan propped himself up against the rock wall and gestured for Connor to lay his head in the crook of his arm. Dinna fash, Connor, Ill keep the watch, said Duncan enfolding his plaid about them both. The mystery man did not tease them that night.

Connor got a good nights sleep and the next day he was in better spirits. Despite the ongoing rain, they managed to shoot some quail and set a few snares.

Ah, my young one, the teacher has finally become complacent. The man who stepped into view pulled out his sword and advanced on Duncan who backed away warily. Whats wrong pup?! Forget your sword? Didnt Connor teach you to take it wherever you went?

Duncan backed into a clearing and relief washed over him along with Connors presence.

Yes, I did teach him that. I also taught him to challenge his opponents honourably, not skulk around like some skunk.

The mans face registered surprise as Connor lunged at him. The incessant rain had softened the ground considerably and the mystery Immortal slid backward as Connors body connected. Their swords clashed and they both went down. Rolling quickly to his feet, Connor advanced on the other man who was still scrabbling in the mud.

The other man made it to his feet just in time to parry another thrust. Connor did not let up on the attack and soon his sword found its mark. He wrenched the katana free as Kipin fell to his knees.

Know that one deception was met with another, coward, and you lost your life because of it, growled Connor. Duncan watched the katana sweep down in that deadly arc.

That night both men slept soundly, the bigger dark haired one curled around the slighter light haired one.

Duncan grunted as his furry companion suddenly sprang from his chest and raced to the door. He shook his head and wondered how it was that she could sense an Immortal at the same time he could. Methos poked his head in after a quick knock. Hey Highlander, want to go for a walk?

Back To The Authors' Pages