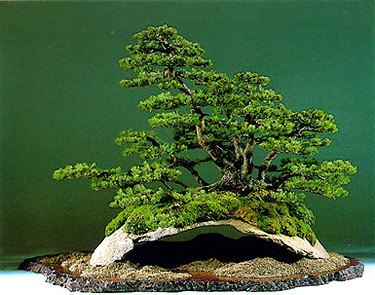 Seeds of Wisdom
Celedon
Email Me!

Archivist's notes: This was a Mid-Week Challenge on the Holyground forum. The parameters of the challenge were to write a story involving a garden of any type and have two immortals in the story.

Grimy, dirt-streaked cotton gloves methodically poked and prodded the moist earth which surrounded the tiny, gnarled tree trunk in the center of a small, square piece of pottery. They paused in mid-air; then one hand disappeared under the side of the workbench while the other one cleared away the debris from where the gardener stood so that nothing would interfere with his point of defense in any direction.

Eyes the color of cast steel glanced over towards the windows of the rooftop greenhouse then his feet accompanied his gaze to the windows to look four stories below at the street. In a still-gloved hand an open-mouthed dragon head katana was tightly grasped. It glittered brightly in the sunshine that filtered through the greenhouse's multi-paned enclosure. "Damn," the gardener softly hissed as he watched someone get off a motorcycle and head for his door. He wasn't expecting anyone to drop in--and company was the last thing he wanted or needed now. Especially not immortal company like his unwanted guest was and who now stood at his doorstep four stories below.

He glanced around at the rows and rows of workbenches filled with potted plants of all kinds, both flowering and non, shrubbery and other plants he had gathered over the years. He shook his head then barged through the greenhouse doorway into his private elevator.

By the time the doors snicked open, he could already feel the other's presence--not strong but not totally weak either. His face became a mask of deadly intent and determination. He pounced upon the doorway as the buzzer rang again and jerked it open; the katana automatically raised to throat level on the other immortal. "What?" he said in a quiet yet intense voice to the young man before him. "What do you want?"

The younger man raised his hands and stepped back down the short stoop's stairway gulping down the hard lump in his throat. "Whoa! Sir Lancelot!" He indicated himself with one hand. "I'm unarmed--put down that thing anyway!"

"What did you call me?" The gardener peered closer at the young man then grabbed him by the front of his tee and jacket and roughly hauled him inside his doorway. He glanced up and down the street to see if anyone had seen his actions but the street was fairly deserted and that satisfied him.

The katana swung round to his visitor's throat again as he turned his attention towards him. "I know you. You're the one who followed me to Soldier's Bridge almost two years ago in Seacouver." He paused and his eyes narrowed as he looked the unwanted guest over. "You're one of us now."

The young man mutely nodded, his eyes remaining on the blade of the katana as he silently prayed that he'd give this guy no chance or reason for using it. "Yeah, I guess that's me."

He looked over the man he had called 'Sir Lancelot' from almost the first moment he had seen him nearly two years ago. A streak of mud was smeared across one cheek; the tee he wore was covered in bits of dirt and pieces of what looked to be grass of some kind. He certainly didn't look too dangerous-- providing that you didn't look at the experienced way he held the katana or looked into his eyes.

"How did you find me and what do you want?" One hand had remained enmeshed in the boy's coat and tee all of this time; he pulled the boy closer to him. "Where's Duncan?"

The interloper's eyelids flickered a few times. "Who?"

A pinpoint of blood trickled down his neck as the katana tip nicked him. "Oh, him!" Damn, the guy was serious when it came to this immortal business! he thought to himself. He decided then and there that he had better tell the truth or else... "I don't know where he is--and frankly I don't care!" He searched the other man's eyes as images of his teacher and friend rapidly passed before his eyes. Images that showed how easily he could have lost his head to a man he had trusted and had even loved as a father and a big brother.

Shaking his head to clear it, he continued, "I grabbed your address from his desk one day. Thought it might come in handy some day, provided I lived long enough to use the information."

The katana lowered. "Follow me, I have work to finish," the gardener abruptly replied. He led the way to the elevator and punched at the up button. He threw a glance over at his visitor. "What's your name? I never found that out before I left town two years ago."

"Ryan. Richie Ryan." With that introduction made, the elevator opened then swallowed them whole so it could escort them back to the rooftop.

With an almost penetrating silence, the doors opened onto the roof and, in a few short strides, both men were standing in the greenhouse. One man regarded the other with his full attention while the younger of the two was agape as he looked around the interior of the place.

"You garden?" finally came from the astonished boy's mouth. He walked over to a long table where rows of tiny flowers in hues of white, pink and lavender were arranged in long rows. He picked up a pot and examined it closely. "Flowers? You've got to be kidding, right?"

"It's heather." When the boy looked blankly at him, Connor explained further. "From my homeland. I always can carry a part of it with me even though I can't be what I once was all the time." He paused then corrected himself. "Most of the time."

"Oh." Richie's attention turned to the table that held dozens of tiny trees of different shapes and sizes. "Tiny trees!" He held up one of the pots and looked it over, marveling how unique it was and how perfectly proportioned it seemed.

"They're called bonsai. They are a bit like us--the one you're holding is over two hundred years old." When the pot bobbed about in the other man's hands when he heard the age of the tree pronounced, Connor admonished, "Careful!" He watched as the pot was set down as if it were a delicate thing then said, "What happened in Seacouver?"

Richie's deep blue eyes became troubled and he turned away from the stare he was given by the older man. "I don't want to talk about it!"

Connor watched Richie's back silently for a few minutes as his hands fiddled absently with a plant he had set before him. After awhile he said, "If you have come to me for help, I can't give it to you. Not unless you tell me what happened and why you are here."

In anger and in agony, Richie turned on the other man. "Man, you two are so alike!" One hand reached out in mid-air almost in an appeal but also in emphasis. "You wanna know what happened? The guy nearly killed me! That's what happened, OK? You satisfied? I was almost dead for good at the hands of my so called goddamn teacher!" he retorted hotly. "Is that what you want to hear?"

Connor said nothing but inwardly was appalled. It can't be true!" he thought. Not Duncan! I taught him better than that! Walking over beside Richie,his face never betraying what he was thinking or feeling, he grabbed a small trowel and began shuffling around some dirt into a pot. "Put your fingers here and hold the dirt back."

Richie looked at him in shock and in confusion. If he had been looking for sympathy, then he had come to the wrong place, he quickly surmised. But if he hadn't come for tea and sympathy, then why had he come? Because he didn't know of anyone else who might be trustworthy? Because Mac had trusted him or because maybe he could learn something from him in case he needed to know better how to defend himself should he need to if Mac came after him again?

Complying with Connor's request, he held the opening in the soil; Connor gently eased a bonsai plant into the soil, then began to cover it up and Richie joined in. It felt good to have something solid to hold onto if only for a moment--something that he knew had been around forever. It was both soothing and at the same time, pleasureable.

They worked together side by side in deep silence, each with their own thoughts and secrets whirling about their minds as they potted and re-potted various plants. After about a half-hour, Connor broke the silence. "You know Richie, that most immortals are like everyone else. There are good ones and there are bad ones."

"We are like they--mortals--are--and yet we aren't. We weed out the bad immortals hopefully in an effort to win the Prize so that we can save this world from an eternity of darkness. Like mortals, there are some immortals who start out as seeds, just like these plants do." He swept his arm out in an arc as he indicated the contents of the room. "But these "seeds" can grow in different ways. Some will become twisted, stunted by not enough sunshine or for lack of nourishment. Others will thrive on what is given to them, no matter how much or how little."

Richie looked at Connor solemnly then raised his eyebrows. "And? What is this all leading to?"

Connor paused as he looked off towards the distant skyline of Manhattan then took a deep breath before releasing it. "You can be a weed or not, Richie. It's your choice at this stage of your life. You can reach for the sunshine and live or you can hide in the shadows, angry, hurt, and resentful until it eats your soul."

"He tried to kill me!" Richie exploded in anger. "Don't you get it?"

"There can be only one. Remember that rule, Richie? Or is it one that Duncan forgot to teach you?" Connor said levelly but his voice dripped ice. "You can live or die on your terms if you want to and if you live long enough to do just that. When it comes down to the Gathering, will all that has happened to you really and truly matter? Will you grow from what has happened or will you allow yourself to become gnarled and stunted to the point that there is nothing but revenge and hatred on your mind against anyone?"

He searched the face of the boy, hoping that the message he was trying to convey was getting through to him. He wanted him to live and to be willing to live but in the sunshine and not the darkness. He knew the darkness that was in everyone's soul. He had felt evil, had felt the hatred, experienced the anger and the thirst for vengeance when he had killed the Kurgan and it wasn't what he would wish on the boy or on anyone.

Richie's face became cloudy in anger. "You don't understand, Connor MacLeod!" he roared at his host. "Rot in hell!" With that, he spun around and left.

Connor watched him go then went back to his task of re-potting plants while he prayed that the words he had given the boy would be enough to protect him now and in the future. He stopped after a few minutes then went over to watch the street below. When he saw Richie below him jump onto his motorcylce and roar away, his eyes followed the other immortal's path. Whispering into the air that suddenly seemed to be too heavy to breathe, he commented, "Live. By God, live!"