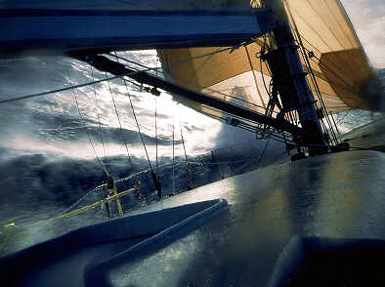 This is not really an answer to Celedon's challenge (I've already written my sea story -The Set of the Sail) about Connor, any body of water, any size ship, and a break from the Game or a vacation. It just stewed in my brain for a few days and tumbled out on my keyboard when I wasn't looking. Stuff happens, y'know?

The ship was tossed to and fro among the foamy waves and Connor's voice could be heard clearly.

"Batten down the hatches! Haul down the top sails! You there, keep a steady hand on that wheel! This storm's a fierce one, we may not make it through!"

"But Capt'n," a falsetto voice was heard, "we're taking on too much water! We have to abandon ship!"

"You scurvy dog," Connor's voice was stern, "I'll have no such talk aboard my ship! You there, grab that line and tie down the cargo!"

It was as if the mighty hand of Neptune reached up and caught the tiny ship, forcing it below the briny sea foam. "Abandon ship!" the captain called out. "Abandon ship!"

"Door's open, John," Connor called as he sank beneath the foam of Mr. Bubble, taking the toy boat with him. 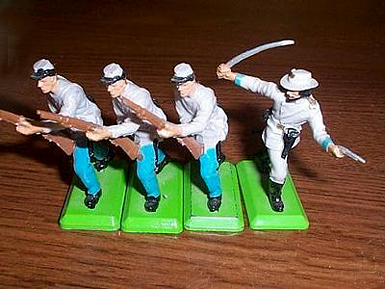 And then someone wondered what Connor would do with John's toy soldiers...again, it stewed for a few days, and it sprang forth unbidden...

Johnny Has Gone For a Soldier

Connor MacLeod walked through the living room, cinching his bathrobe, not bothering with the light switch. More than enough city light filtered through the tall windows and he knew where every piece of furniture was placed. He didn't count on the little stuff though.

He stubbed a toe, lurched, and stepped squarely on something small, hard and painful. He fell in the direction of the couch to ease the landing. His swearing wasn't enough to wake the dead, but it did rouse others in the household.

Overhead lights flipped on and the Highlander squinted, glaring at his visiting kinsman for turning on the light, and then at the small boy at his side. His eyes swept the room, taking in the stacks of books and magazines, and a multitude of small soldiers, paint-chipped tin and lead from the Great War, small green plastic soldiers from the last forty years, and some model soldiers representing the Napoleonic Wars, painstakingly hand-painted. A G.I Joe, various Star Wars action figures, a half dozen Power Rangers and two Teenage Mutant Ninja Turtles completed the melee of a child's play.

"John, I've told you before to pick up your toys if you're going to play out here."

"Connor," his kinsman's sleepy voice spoke gently, "You can't blame John for this."

"Duncan, don't get in the way of my disciplining my son. You'll just have to learn how to take care of your toys, John, and put them away. Put them back in the box, and take the box to my room. You can have them back at the end of the month."

"Duncan, I asked you not to interfere in this." Duncan fell silent, a comforting hand rested on his nephew's shoulder. "Now, John. There's no excuse for this mess."

"You don't remember do you?" Duncan said in a firmer tone. "I didn't think you were that drunk."

"Look around you, you jackass. When Johnny went to bed, this room was clean. You did this."

Connor was taken aback. He surveyed the scene with a critical eye -- and then he remembered -- "Gettysburg." He looked up at his family, noting John's trembling lip, and he held out his arms. The child rushed to his father and received a gentle bear hug and a kiss on the forehead. "Sorry, Johnny, my precious boy! I owe you one, don't I?"

"Pancakes or waffles for breakfast?"

"Oui, Mon capitaine! It's still night though, go back to bed for a while longer, okay?"

"Okay." The boy scooted away, and grabbed his uncle's hand. "A story, Uncle Duncan."

"All right, youngster." The dark Scot hauled the five-year-old up in his arms.

"I can't believe I was that drunk," Connor muttered.

Duncan looked at his friend, and grinned. "You were pretty smashed before you gave it up. It's not surprising you don't remember."

"No, not that," Connor knelt down on the floor and shifted the pile of three encyclopedias over about seven inches. "I had Little Round Top in the wrong place."

"Was he always like this, Uncle Duncan?" The boy was wise beyond his years.

Duncan looked back at the Highlander on the floor, bare legs and feet sprawled out from under the bathrobe. "Not always, Johnny, but there is just something about boys and their toys."

Connor cried out a soft "Garnet, Kemper, Armistead -- Pickett's Charge," and he slowly moved Pickett's forces across the floor toward their destruction.

So thanks to Celedon for the thought and to August who wondered about toy soldiers.